The story of “Charlotte’s Web” by E.B. White is an American story of overcoming obstacles through innovation and creativity. This story rings even more true when you hear about the story of little Charlotte in Colorado.

Charlotte Figi is a young American girl with all the aspirations of any other little girl. She paints and enjoys the outdoors. She likes to wear fun and interesting boots, and she recently completed the second grade. But Charlotte’s childhood was very different from all the other little girls. When Charlotte was only three months old she had been laying on her back after a bath. Her father said that “her eyes just started flickering.” It was a seizure. They rushed her to the hospital and after a full work up they had not found the source of the seizure. They were assured that Charlotte would grow out of it, but they were all too wrong.

The seizures continued. Despite being on drugs such as barbiturates she was keeping in step with her twin brother when it came to walking and talking. However, by the age of two her parents could tell that the seizures were taking their toll and she started to cognitively slip away.

Charlotte had developed Dravet syndrome, a condition which results in grand mal seizures and at the height of her ailment she was stricken by almost three hundred seizures per week. The constant seizures left her in a debilitated state. They tried everything to give their daughter a normal life. They were presented with experimental drugs from France and a ketogenic diet but nothing had lasting results. 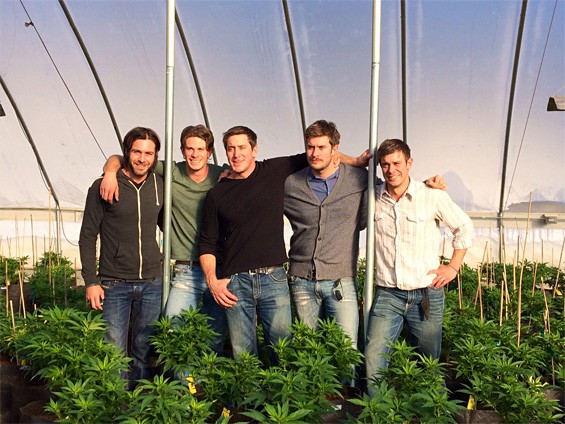 5 of the 6 Stanley Brothers

In another part of Colorado the Stanley brothers, one of the regions powerhouse growers had been working on crossing industrial hemp with low THC strains of cannabis. The result was a high CBD plant that had no psychoactive effect. Or in your average cannabis users opinion, useless. But Charlotte was no average cannabis consumer. Among all the varied research about cannabis use and it’s interactions with the brain, one thing is clear, you don’t want children to get high. Josh Stanley outlines their goal in his statement :

Desperate for a meaningful and safe solution, Charlotte’s parents heard about another child whose seizures had been helped by cannabidiol. Paige, Charlotte’s mom had voted against cannabis laws several times. But with her daughter’s life on the line they had to give it a try. That’s when they found the Stanley Brothers. A strain that was called Charlotte’s Web in honor of Charlotte, was the answer to her ailment. The very low tetrahydrocannabinol (THC, psychoactive component of cannabis) and high levels of cannabidiol (CBD) made it perfect for Charlotte’s treatment.

The best explanation presented so far is that the CBD acts on the brain to calm the excess electrical signals that are put out in seizures. The CBD also acts to protect current neuro pathways from further damage.

Charlotte began to see immediate improvement and is now on a safe regiment of Charlotte’s Web hemp oil that is either given under her tongue or administered in her food. This dose is enough to allow a father to hear his daughter’s laughter again. Her father Matt said “I literally see Charlotte’s brain making connections that haven’t been made in years.”

But getting to this place wasn’t easy. With major restrictions on the cultivation and movement of cannabis related products the Stanley brothers have had to fight for their right to distribute this life improving cannabis product to the people who need it.

Charlotte and the CBD oil the Stanley’s had produced had intertwined fates. What would happen if the Figi’s needed to take a trip? Would Charlotte go without her life restoring medicine? The media had been instrumental in what would become the stepping stones to a vast improvement in the legislation. It started when young Charlotte was just five years old.

In 2013 the CNN documentary “Weed” hosted by Dr. Sanjay Gupta has helped to shed a caring light on the needs of cannabis patients. Charlotte was featured as being one of the many people who live with severe medical and psychological issue that can be alleviated with cannabis products.  Compound the good it can do with the fact that cannabis legalization support is at an all time high; you can feel the change in the air.

The laws need to catch up. In a clarification from the DEA. The CBD oil is still part of the “marihuana” (their word, not mine) plant and is still a schedule 1 drug. It is these archaic structures in American society that forces the Stanley brothers to move parts of the operation to Uruguay, to continue doing research. At this point The Figi’s will be smuggling Charlotte’s Web CBD oil across the states should they decide to go on a trip.

Fortunately there are organizations out there such as The Realm of Caring Foundation to further advance the cause of the caring through cannabis culture. It is likely that the success story of Charlotte Figi will be an epoch in the history of the road to legalization. And the most important fight of little Charlotte’s life.

What do you think of Charlotte’s Web CBD Oil?

About the Author: Halcyon Daze

Halcyon Daze is a writer on the west coast. He served in the Navy for almost a decade, and upon his exit sought a different lifestyle. He currently writes a lifestyle blog and focuses on traveling and writing. http://www.howtosurviveinthewest.info/ Profile photo by Vaughan Granberg