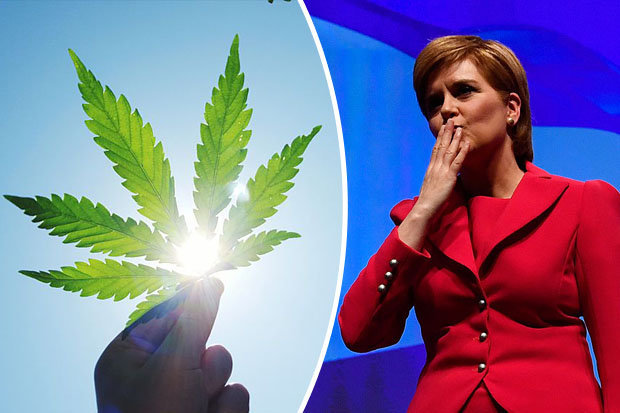 This Saturday 15th October the Scottish National Party (SNP) backed a motion to decriminalise Cannabis for medical patients. Delegates at the SNP conference overwhelmingly voted in favour of the measure. The conference heard from people who both backed and were against the motion, when the vote was cast the message was heard loud in clear in the UK. The SNP believes that NHS patients in Scotland should have access to cannabis for medical purposes.

The conference heard from Ms Brennan-Whitefield who has Multiple Sclerosis. She implored the conference to show “compassion and common sense”  adding “I’m not advocating the smoking of cannabis, what I’m advocating is a progressive and reasonable, compassionate society where you can access pain relief.”

“I have been living with multiple sclerosis for nine years and the fact that I’m standing here giving this speech means I am one of the lucky ones.

“It has become very clear to me over these last nine years that many people living with MS have been using cannabis to help with the symptoms of that condition, in fact it’s one of the worst kept secrets at the hospital.

“All of these people risk a criminal record, unlike in Australia, Chile, Canada, Finland, France, Germany, Romania and some US states.”

Councillor Audrey Doig stood in opposition of the motion, using the age old Cannabis is a gateway argument. She said “Nowadays people are looking for quick fixes as far as pain is concerned, and they look for quick fixes when the pain medication doesn’t work and they go on to stronger pain killers.

“I’m afraid this would happen with this particular medication.

“How do I know this? I had a cousin who died a number of years ago in Canada. He started taking cannabis because he was having pain when he was playing ice hockey and his mates in ice hockey did the same.

“Unfortunately my cousin had an addictive personality and when the pain wasn’t relieved by taking cannabis he went on to taking stronger drugs.”

Future Of Cannabis Legalization In Scotland

Currently cannabis is a class B drug, with people facing up to five years in jail for possessing it, or up to 14 years in prison for being involved in its supply or production. This motion is positive but it doesn’t mean that Scotland has the power to legalize cannabis. As it stands this is down to Westminster in London. This motion will now start calls for power to be devolved from Westminster to the Scottish seat of power in Holyrood. Recently in the UK a cross party group of MPs have petitioned Westminster for Cannabis to be used medicinally. The MHRA in the last week have also come to the conclusion that CBD products do have medicinal properties.

For anyone in the UK these statements will seem positive but in reality there is a long way to go. The central government and in particular the ruling Conservative Party doesn’t have the stomach to make these changes. For now these are small steps forward, long term let’s hope this is the start of a serious change in UK legislature that finally offers a sensible approach to cannabis policy.

What do you think to this move from the SNP? Let us know below in the comments section.