The Sorry State of Cannabis Research, Summed Up in Four Pictures

When the subject of cannabis comes up, you probably conjure the same mental picture as the rest of as. You think of those gorgeous, glistening nugs of the most spectacular size and density, far too sticky to break up by hand and with the most wonderful tapestry of colours. When anybody mentions medical cannabis, you probably also think of something similar. Though perhaps, not quite as loaded with THC or mind-blowingly powerful. In any case, anyone who’s been lucky enough to experience both will know that these days, quality standards have never been higher.

So here’s a question – what kind of picture would come to mind if someone was to mention government marijuana? As in the government-grade cannabis that is cultivated, harvested and provided specifically for the purposes of carrying out the most important research in the history of modern marijuana? 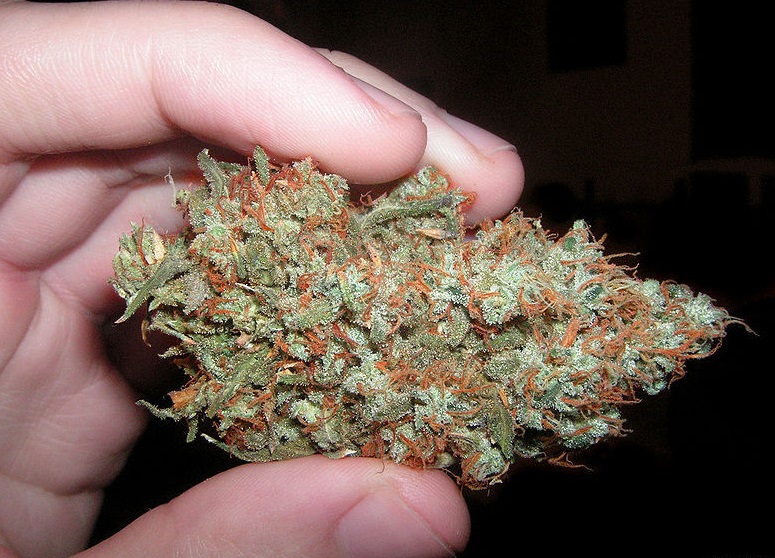 Contrary to popular belief, those who study cannabis and dedicate their lives to finding out exactly how beneficial it can be in medical terms do not have access to the same kind of cannabis everyone else is using. Even in instances where both recreational and medical cannabis have been legalized in various US states, those carrying out essential research still have to arcane cannabis from the Federal government, in accordance with legislation dating back to the 1960s.

So you’d quite rightly expect that the cannabis these guys would be getting hold of would be nothing short of spectacular. The best of the best – the kind of cannabis that paints the most accurate picture of what exactly everyday marijuana on the streets can and cannot do.

But you’d also be wrong…and spectacularly so!

As of late, more researchers than ever before have been voicing their complaints, criticisms and frustration with regard to the complete and utter crap they are being provided with for important research purposes. Rather than being provided with quality cannabis, they are instead being supplied with something that the average cannabis user would probably throw in the trash in absolute disgust.

And if you don’t believe us that it really is as bad as this, feel free to check it out yourself in this next depressing yet highly revealing image. 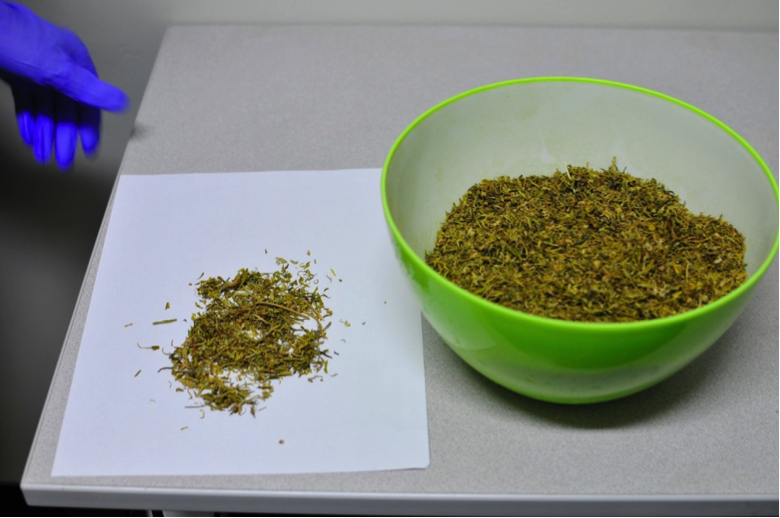 This picture, which has now unsurprisingly gone viral, was initially shared by a researcher by the name of Sue Sisley. She received this government issued cannabis in accordance with proper Federal guidelines, in order to serve as the basis for an extremely effective and brand-new study into the effectiveness of medical cannabis for military veterans with diagnosed cases of PTSD.

She, like anyone else would have, expected to be supplied with the actual cannabis that would be prescribed to such individuals, should the research prove it to be effective. Instead, she received a batch of this tragic looking government marijuana, which looks more like a bag of expired dried Rosemary than any cannabis we personally have ever come across.

Just in case you needed any further illustration of how terrible the stuff really is, up next is a side by side comparison with an everyday sample of generic commercial medical cannabis. 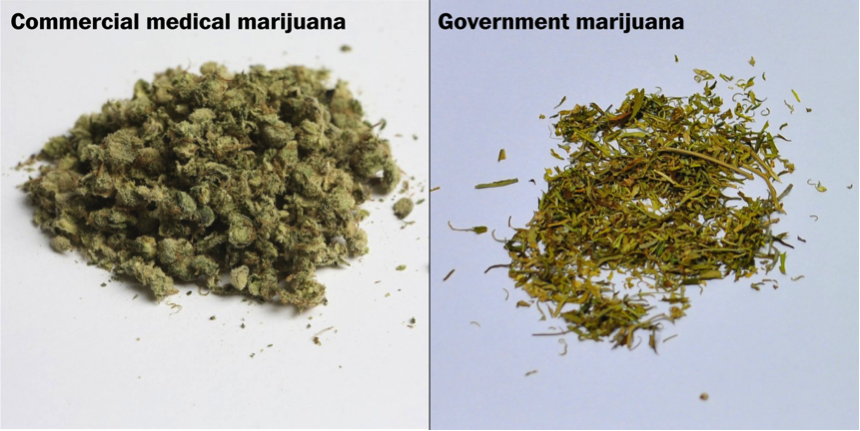 Needless to say, you don’t have to be a cannabis connoisseur or even a big fan of the stuff to note the spectacular difference between the two of them. Speaking with PBS last week, the researcher responsible for sharing the image said that not only does it not look like cannabis, but it doesn’t even smell like cannabis either. It is clearly comprised largely of dried and ground up sticks and stems, which find their way immediately into the trash in the hands of any everyday cannabis smoker. Not only this, but you’d be forgiven for thinking that everyone knows it’s what’s contained in the flowers that’s of primary value and interest, in terms of potential medical applications.

Jake Browne, speaking on behalf of the Denver Post’s Cannabist marijuana news site, stated that not only is the government grade cannabis pictured of tragic quality, but it is in fact no less than completely and utterly unusable and unviable.

“In two decades of smoking weed, I’ve never seen anything that looks like that,” Browne said.

“People typically smoke the flower of the plant, but here you can clearly see stems and leaves in there as well, parts that should be discarded. Inhaling that would be like eating an apple, including the seeds inside it and the branch it grew on.”

Of course, some have suggested (perhaps out of pure desperation) that it could simply be that the researcher in this instance received an absolutely terrible batch of government cannabis, which usually isn’t nearly as bad as this. Nevertheless, there’s more than enough evidence to suggest that this really is the standard of research-grade cannabis that is currently being provided by the Federal government, for some of the most important studies in recent history. 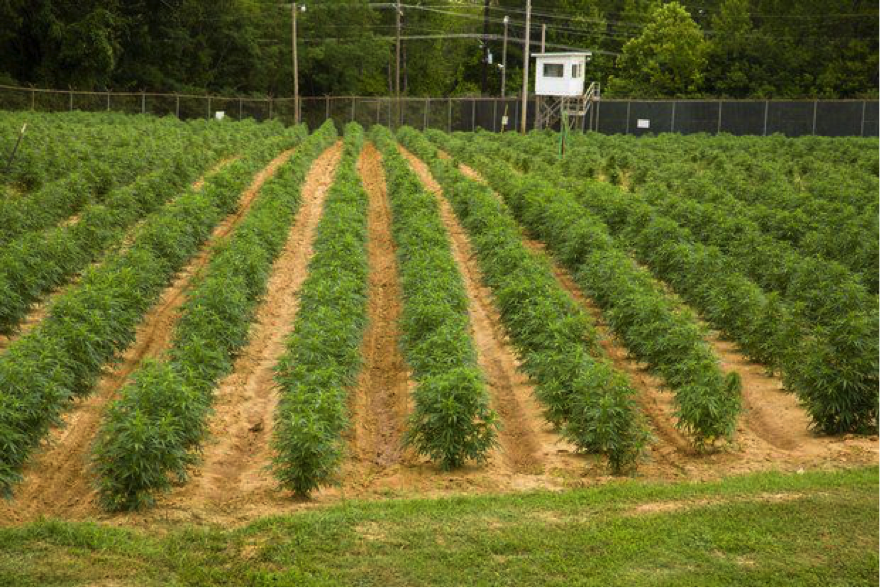 For one thing, every single scrap of cannabis issued by the Federal government is grown at one facility and one facility alone at the University of Mississippi. Take a look at the picture and you’ll see how unimpressive it all is.

The entire operation is watched over by the National Institute on Drug Abuse (NIDA), and despite the fact that the DEA began implementing measures last year that would allow other businesses and facilities to begin cultivating and supplying cannabis for the purposes of research, not a single one has been approved or provided with the required licensing to date.

The trouble is that when you go beyond the absolutely hideous looks of the stuff, you find yourself even more disappointed. According to Sisley, upon carrying out her own tests of a batch of research cannabis she was provided with, a strain that was supposed to have a 13% THC content was actually found to have no more than around 8%. Which in turn would mean that any conclusions based on evidence produced while studying this particular batch would have been completely inaccurate and useless. Which counts double, when considering the fact that much of the commercially available cannabis doing the rounds these days has an average THC concentration in the region of 15% to 20%, with some strains taking things as high as near-30%.

From the perspective of a researcher, it is both disappointing and frustrating. It is a little like asking a team to investigate the effects malt whisky has on the body and giving them a can of Budweiser to work with. It shows that even in an era where medical cannabis has been legalized across more than half of all North American states, the efforts and resources being focused on the research and development of high quality medical cannabis products are still dangerously sub-par.