How to Get the Most Out of Every Joint You Roll

If joints are your thing, you probably think you’ve got the art of rolling and smoking, licked. Yes…that was an intended pun. Everyone has their own unique strategy when it comes to both getting the job done and enjoying the fruits of your labour. What’s more, it’s rare for a seasoned stoner to take kindly to someone else telling them a) what they’re doing wrong or b) how they could be doing things better. Suffice to say therefore, this article runs the risk of ruffling a few feathers!

Still, we consider it to be an important public service – anything that helps the cannabis community get the most out of every gram of precious weed. We’d never go so far as to say there’s a ‘right’ or ‘wrong’ way to go about joint rolling. After all, we all have our own opinions on the best way and if you’re happy with the result, you can do it any way you like! How ever, there are certain tips, tricks and techniques the experts would argue can indeed enhance and improve the whole experience. Not only this, but there will always be those (you know who you are) who despite having tried, tried and tried again don’t seem to be able to roll a decent joint for toffee.

The Art of Rolling

So consider the following list of tips a helpful optional resource, rather than a lecture on what you should be doing. Try as few or as many as you like and see which have a positive impact on your rolling routine – or any effect at all, for that matter!

if you’ve already decided you don’t want to go any further just take away this one thing I was told once upon a time when I first learnt to craft a joint. It’s all in the preparation! 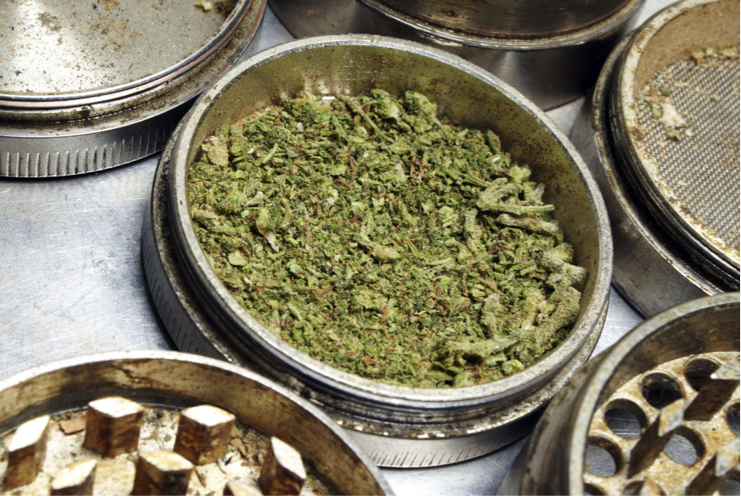 First of all, there are two very important reasons why it’s important to grind your cannabis pretty well before packing it into a joint. First of all, the fact that it is broken down into smaller pieces means you’ll be able to stuff way more of it in there in the first place. It doesn’t (or shouldn’t) take a genius to figure out that the more cannabis there is in there, the slower the joint’s going to burn and the more satisfying it is going to be. Aside from this, finely-ground cannabis ensures a much more even burn around all sides of the joint. By contrast, chunks of different sizes will always lead to one or more sides burning faster than the other – not to mention the whole joint burning down/out in no time. Of course, it’s not necessarily advisable to grind your bud down to the consistency of flour – this probably isn’t going to breed positive results. Nevertheless, be generous with the grinding and you’ll notice a difference.

It might sound like an obvious tip, but it’s an important tip to follow nonetheless. Above and beyond most other factors, it is the quality of the cannabis you pick up in the first place that will have the biggest impact on the enjoyment you get out of your joints. And not just by way of the quality of the smoke either – weed quality also affects burn rates. The reason being that the length of time the weed has been cured for will make a difference to how quickly or otherwise it burns. If you buy cannabis that hasn’t been cured for very long, this will result in a joint that burns considerably slower. By contrast, weed that had been over-cured and has ended up too dry will burn away far too quickly. It’s a case therefore of buying from a source you can trust and knowing exactly what makes for ideal joint-rolling weed. If in doubt, ask your supplier for their own recommendations.

Likewise, it’s worth bearing in mind that contrary to popular belief, all papers are not manufactured to the same quality standard. Quite to the contrary in fact, as some are exponentially higher in quality than others. The simple fact of the matter is that if you pick up the cheapest, lamest, unbranded papers just to save a few pennies, chances are you will be rewarded with an uneven and unsatisfying smoke. It’s not as if the best quality papers on the market will affect the quality of the weed, but they will massively affect the quality of the joints you roll. If you’re not convinced, simply roll two identical joints using papers from opposite ends of the scale and see what happens when they are smoked.

If you do insist on using substandard papers or only happen to have access to low-grade materials for some reason, you might like to think about using more than one paper. While generally unnecessary with better skins and standard joint an extra layer of paper will have a marked impact on how quickly and evenly the joint burns. Adding an extra sheet of poor-quality paper has the potential to affect the harshness of the smoke, but it will at least slow the burn rate down to a more desirable level. Once again, it’s a case of experimenting with one or more sheets of paper with the joints you roll, in order to determine what works best in accordance with your preferences.

One of the main reasons why amateurs tend to have trouble rolling quality joints that last a long time is the fact that they find it tricky to roll them tight enough. The simple fact of the matter is that little more than airflow determines exactly how fast the joint will burn. The more air there is in the joint by way of gaps and air spaces, the less weed there is in there and the faster it will burn. At the other end of the scale, a joint that is packed far too tightly with no space for air to flow at all is unlikely to burn as it should. It’s a case therefore of finding a happy medium, but if your joints always seem to burn down too quickly, it could simply be that they are not being rolled tightly enough.

If you like the idea of slowing down the burn rate of your joint while at the same time giving its potency a massive shove in the right direction, you could always try your hand at ‘twaxing’. This basically refers to the increasingly popular process of using cannabis concentrates as an extra ingredient, which has this double-whammy effect and makes a huge difference. Not only does adding a cannabis butter, crumble or wax work as a burn rate buffer, but it also ups the THC potency of the joint massively. Not necessarily an approach recommended for amateurs though, as the resulting joint has the potential to be nothing short of mind-blowingly strong. If you know you can handle it though, it’s the kind of upgrade you might just find yourself sticking with every time.

It doesn’t matter how cliché you think they are or how much you reckon you don’t need one, roach clips will always help you get more out of your joints. The simple fact of the matter is that when you smoke joints purely by hand, it’s inevitable that you will occasionally or even quite frequently rob yourself of the last few little shreds of weed at the end. Needless to say, this is the kind of wastage that adds up over time. You can always recycle these bits and pieces into new joints or to fill bowls, but why bother when you can hit every last bit of it by using a roach clip? It’s not as if they’re expensive and you’ll soon get used to it – even if you do feel a little silly at first.

The most controversial of all suggestions when it comes to longer-lasting joints, there’s really no disputing the fact that tobacco will have the desired effect. This is particularly true if you happen to be dealing with the dregs of a batch of cannabis that have gone overly dry and a bit on the crappy side. Tobacco can help transform even the most tired-old cannabis into a tightly-packed, slow-burning joint of epic proportions. The only problem being that for millions of seasoned stoners, they’d probably rather not smoke at all than pollute their bud with tobacco. Still, it’s a matter of personal taste and opinion – and it’s always an option on the table.

Last but not least, if you are fundamentally awful at rolling joints and would genuinely like to improve, you need only find a decent online tutorial and put in the necessary effort. If you’ve fallen into bad habits, you’re never going to break them without a gentle push in the right direction. So if you’re really struggling to make anything that wouldn’t embarrass the hell out of you, hit YouTube right now and you’ll be rolling with the best of them in no time