As the countdown continues toward the big November vote, both sides of the cannabis legalization camp are bringing out the big guns. The only difference being that while the pro-legalization camp focuses on evidence, facts, science and the truth about cannabis, critics are more interested in bogus scare stories.

Just a couple of days from now, four North American states will vote whether or not to legalize medical marijuana, while five will hit the ballot boxes to decide on recreational pot. Suffice to say, the outcome is likely to be historic to say the least. Even if every state doesn’t go ahead with legalization, we’re still going to be looking at a future where the cannabis landscape in the US is changed forever. That being said, all signs are pointing to victories for the ‘yes’ camp in each of the nine states – unless of course the ‘no’ folks manage to disrupt things at the last minute.

Over in Massachusetts, folks will be voting whether or not to allow cannabis to be regulated, controlled, taxed and sold in pretty much the same manner as alcohol. If Question 4 goes ahead…which looks pretty likely…it will be made legal for residents to possess modest amounts of cannabis for personal consumption and grow a handful of their own plants at home. It will also kick-start the state’s legal cannabis retail industry, adding hundreds of millions of dollars to Massachusetts’ tax piggy bank.

Generally speaking, the reaction to the bill across the state has been extremely positive. Which was to be expected, given the northern liberal stronghold Massachusetts is. But as far as those attempting to keep cannabis well and truly out of circulation have confirmed, the time has come to use trumped-up statistics and absurd scare stories to spook the public out.

Earlier this week, Jamestown Associates premiered its first anti-cannabis video as in Massachusetts. Nobody had expected it to paint a positive picture of cannabis, but the content of the video was nothing short of ridiculous. Fast-forward to a time a little further down the line from today and we find ourselves faced with a turbulent and terrifying future, where cannabis has entirely destroyed a once wonderful neighbourhood and led to a wave of car accidents. (?) The clip shows a mother with her young daughter (how very predictable) driving around the area and taking in the devastation all around them, with every store having become a cannabis dispensary and painting a picture of near-Armageddon.

What happens next? What do you think happens next…the little girl in the video suddenly finds herself borderline obsessed with the cannabis edibles on sale in a store window. And of course, the cannabis dispensary in question just happens to be placed right next to a toy store. In the background, little can be heard other than blaring sirens and the streets are filled with people smoking cannabis openly and freely. And just when you think the whole thing cannot get any more pathetic, the woman’s young son emerges from the cannabis store carrying a bong.

Seriously – it’s enough to make your blood boil. If you couldn’t see the hilarious side of these kinds of dismal attempts to lie to the public, you’d probably cry. 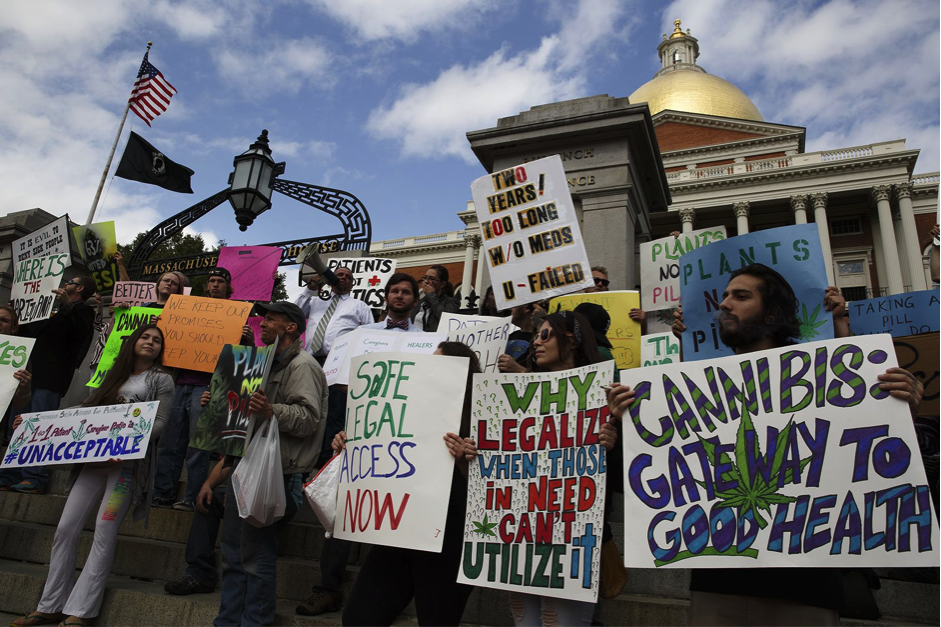 The thing is, technically you can’t stop anyone from having an opinion, or from making their own gloomy predictions for the future. However, when they take a step further and start spouting outright lies pulled from thin air, you’re justified in getting seriously angry.

There’s a female narrator talking throughout, who goes on to tell the viewer that “in pro-pot states, incidents of drugged driving and fatal car accidents are up,” and that there are “more pot shops than McDonald’s and Starbucks combined.” Unsurprisingly, those in the pro-cannabis camp (and pretty much anyone with a brain in their head) have lashed out at the creators of the ad for creating something that’s complete and utter BS of the highest order. And not just BS, but dangerous BS at that.

“This ad has about as much connection to reality as a Donald Trump campaign speech, which should come as no surprise since it’s funded by a Trump endorser and made by a Trump ad firm,” said Jim Borghesani, spokesman for the pro-legalization ballot committee Yes on 4.

The simple fact of the matter is that everything the video tries to convey is wrong. Fabricated simply for the sake of proving a nonsensical point, despite overwhelming evidence pointing to the contrary. Does the whole of Colorado really look like the place cooked up in the video? Are bongs routinely being sold to kids in Washington? Are car accidents up where pot is legal? No, no and hell no, they’re not. Large-scale studies have shown that legal pot is having no impact whatsoever on road traffic accident rates. There are strict laws in place to prevent edibles being marketed in a manner that appeals to kids and when it comes to children wandering into dispensaries and buying bongs…pull the other one, guys.

Even if there were more dispensaries than fast food and coffee joints combined, this wouldn’t be happening. Suffice to say, if you’re the type that reads into this kind of garbage, it’s time for a reality check.

All of this will probably anger the ‘no’ camp, who will of course claim that their only interest is that of looking after the nation’s young and the future of our communities. The problem being that the way they see pot affecting our kids and communities is somewhere in the region of 100% delusional. It’s not as if we don’t already have working examples up and running of how it could and probably will be in many more states come next year.

In the meantime, it remains to be seen if the video named ‘Neighborhoods’ has any impact whatsoever. It’s just completely sickening that the anti-pot camp has to resort to lies and pathetic scare tactics to try and persuade the public their cause is the correct one. Meanwhile, cannabis advocates simply say hey…take a look at how things are going down in states with legal pot right now. Massive tax earnings, lower use rates among the young, criminal suppliers being driven off the streets, more free police time to focus on real crime.

But no…it’s kids with bongs and little girls wanting to plough into a bunch of cannabis edibles.

You can watch the video yourself using the link below, but be warned. While there’s a good chance you’ll come away laughing your ass off, there’s also a pretty strong chance you’ll be reviled…almost to the point of throwing up. One thing’s for sure though – you’ll definitely come away wondering who in their right mind would actually buy into a word of it?

The sad truth is, quite a lot would…and probably will.