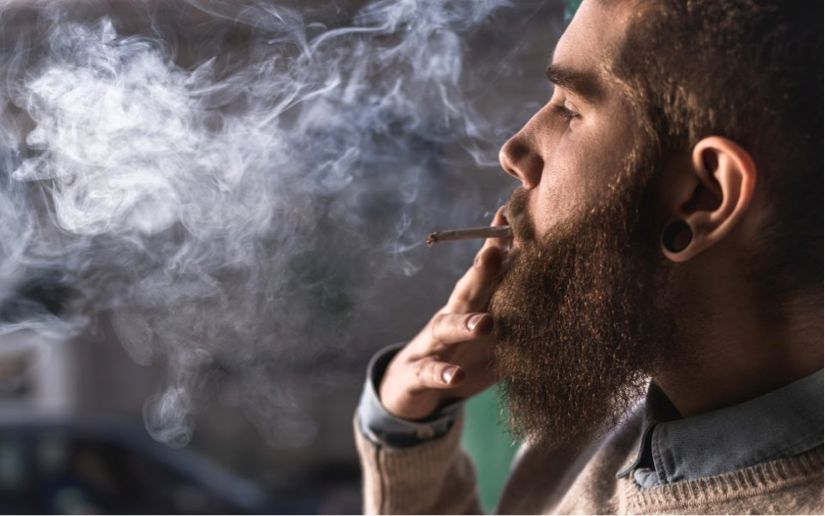 Just to get one important thing out of the way first of all – we’re not doctors. And nor are we health professionals in any sense of the word. Which in turn means that none of the following information should be interpreted as official medical advice, or even recommendations on our part! It’s all simply for reference purposes…not getting ourselves into trouble!

Exactly if and to what extent smoking cannabis damages your lungs is one of the most contentious and on-going debates of all. As far as the vast majority of experts are concerned, the simple fact of the matter is that smoking cannabis isn’t nearly as harmful on the lungs as smoking tobacco. At the same time, this doesn’t mean that it doesn’t carry its own health risks, or should be taken for granted as 100% ‘safe’.

Much of the debate stems from the fact that most people these days know that tobacco smoke can cause all manner of breathing problems and is the number-one cause of lung cancer. The fact that cannabis smoke has to date shown no links whatsoever with lung cancer leads many to believe it isn’t harmful. Particularly upon learning that research has suggested that cannabis may actually be useful in the prevention of lung cancer.

Still, those who are intending to look out for their health as proactively as possible really must factor in the potential dangers associated with cannabis and tobacco smoke alike.

Does Smoking Weed Damage Your Lungs? Cannabis vs. Tobacco

When taking into account the basic facts and figures, it all makes for rather worrying reading. For example, many cannabis users are completely oblivious to the fact that the smoke produced when cannabis is burned contains some of the very same cancer-causing compounds as those of cigarette smoke. What’s more, inhaling cannabis smoke can result in as much as 400% more tar being deposited in the lungs. And given that there are known links between tar and lung cancer, this is something cannabis users need to be aware of.

What makes cannabis completely different is the way in which the smoke also includes cannabinoids – unique and potentially beneficial chemicals that have been linked with cancer-prevention in regular users. Which would seem to suggest that while cannabis smoke has the potential to be detrimental, the risks may be to a certain extent augmented by the benefits.

Interestingly, only two extensive studies into the effects of heavy and on-going cannabis use on the lungs have been carried out. One of which focused on cancer patients’ medical histories, ultimately bringing about the conclusion that cannabis use had absolutely no impact whatsoever on their respective likelihood of developing lung cancer.

Just as long as the individual in question didn’t smoke tobacco, cannabis use did not increase the likelihood of developing cancer.

Which at the time came as something of an enormous surprise. The researchers having initially presumed that the very nature of cannabis smoke would have at least some kind of negative impact on a person’s overall lung cancer risk. As it came to pass, this just wasn’t the case at all.

“The THC in marijuana has well-defined anti-tumoral effects that have been shown to inhibit the growth of a variety of cancers in animal models and tissue culture systems, thus counteracting the potentially tumorigenic effects of the procarcinogens in marijuana smoke,” explained Dr. Tashkin, lead researcher in the 2012 study.

Interestingly, studies have also brought to light evidence which suggests that the beneficial characteristics of cannabis may reduce an individual’s likelihood of developing Chronic Obstructive Pulmonary Disease. Once again, a chronic condition that is far more common among tobacco smokers, but doesn’t seem to be any more prevalent whatsoever among cannabis users.

Now, the thing to remember here is that just because cannabis smoke has been determined not to exacerbate in person’s risk of cancer or COPD, this doesn’t for one moment mean that it is 100% healthy. The reason being that the inhalation of smoke in general has the potential to cause a certain amount of damage to the lungs and airways with heavy and prolonged use. That said, exactly to what extent cannabis smoke affects the lungs remains somewhat unclear from a scientific perspective.

While some studies have brought to light evidence suggesting cannabis can actually be beneficial for the lungs, others have reached the exact opposite conclusion.

In terms of direct correlations between cannabis smoke and any chronic or life threatening respiratory diseases, the short answer is – there aren’t any at all. But at the same time, this doesn’t mean that cannabis smoke cannot damage and irritate the lungs and airways, which can in turn result in conditions like bronchitis.

Which is precisely why heavy and prolonged cannabis use can result in symptoms like coughing, production of phlegm, sore throat, discomfort in the chest, shortness of breath and so on. All of which being clear indications that while cannabis smoke may not be causing any severe diseases in its own right, it still isn’t doing a great deal for your respiratory system in general.

Plus it’s a proven fact that any kind of irritation or acute damage caused by any kind of inhaled smoke can increase susceptibility to infection. Meaning that after a heavy or prolonged cannabis smoking session, you may be far more likely to pick up a cold, flu bug or other of infection/illness.

If any of the above has you worried, the simplest and most effective solution is to experiment with alternative ingestion methods.

For example, vaporizing has become an incredibly popular cannabis inhalation method on a global basis, which experts believe is significantly healthier than traditional cannabis smoking. The reason being that rather than burning the cannabis, good weed vaporizers will instead simply heat it to a much more precise temperature, in order to release the cannabinoids within.

As no smoke is produced, absolutely none of the risks associated with smoking apply. What’s more, not only are vaporizers incredibly convenient, but they can also ensure you get the maximum hit out of every scrap of cannabis you use, with absolutely nothing going to waste.

Of course, critics continue to argue that we still do not know enough about vaping in general to reach an accurate conclusion as to its long-term effects. Which is technically true, but at the same time, every bit of science behind vaping as a whole would seem to suggest that it is an infinitely less harmful ingestion method and smoking.

But if you really want to protect your body to the max while still getting higher than high, edibles could be the way to go. By making the switch to edibles – or at least incorporating them from time to time – you give your entire respiratory system a rest and remove any and all inhalation from the process entirely. Once again, edibles are great for ensuring that not a bit of your bud goes to waste, with the added bonus of being able to carry and consume them absolutely anywhere undetected.

So for the time being at least, it’s impossible to present a final and accurate answer to the question. On one hand, the answer is yes – cannabis smoke does indeed cause harm to your lungs and your airways. But at the same time, there’s plenty of evidence to suggest that it can also compensate by doing plenty of good.

It’s not until more intensive and on-going studies are carried out that we’ll know which side of the argument has the edge.