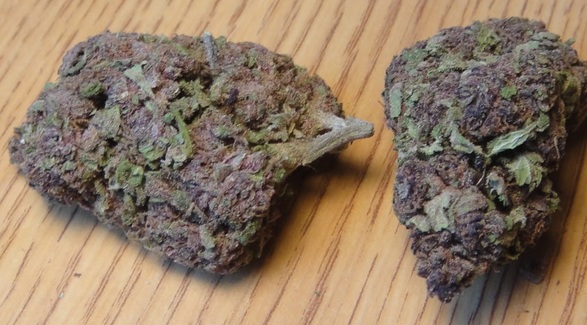 Though we know Purple Cream was cooked up originally in California, there’s little we know about its genetic origins. There’s definitely some skunk in there somewhere, along with quality Kush from India or Afghanistan. This is pretty much given away by the gorgeously deep and earthy skunk fragrance. When burned the Purple Cream strain takes on a more exotic, berry-tinged flavour than you might normally expect from skunk.

There’s no mystery as to Purple Cream’s heavy Indica-dominance, which becomes apparent in a second after your first hit. Instant sedation and deep relaxation take over in an instant, resulting in fast-acting couchlock that goes on for hours. In medical circles, Purple Cream has become a firm favourite for the treatment of insomnia and muscle pains. What’s more, Purple Cream has been routinely turned to for over a decade as a potent and powerful treatment for anxiety. Whether chronic or temporary, it’s a great choice for smoking your worries away.

Purple Cream produces undeniably gorgeous plants, which as an added bonus are easy as pie to grow. If you’re looking to set things up indoors, you can expect plants of a medium height with plenty of dense leaf coverage. As the plants mature the canopy becomes an increasingly enchanting purple colour. Sweet, tasty and gorgeous to look at, it’s a strain that ticks all the right boxes for home-growers. The buds are works of art in their own right, with THC concentrations often going beyond the 22% mark.

You’ll do well with hydro or soil growing methods indoors, though outdoors Purple Cream needs weather at least as warm as the Mediterranean. Hydro does tend to deliver much better yields than standard soil growing. Yields hover around the low to medium range so this isn’t one for cash croppers. Flowering times come in at about nine to ten weeks, so pretty much average on that front too.

Purple Cream is all about growing visually gorgeous plants. Not only that, it produces the kind of weed that was engineered to knock you well and truly off your feet. Not in an unpleasant way, but more in a way that’s almost guaranteed to put you to sleep. It’s so popular as a medicinal strain that it tends to be one of the fastest-sellers at dispensaries, where total droughts on the stuff are common.

Amateurs would be wise to approach with caution! Anyone who knows what they’re doing and is after a seriously heavy Indica hit will be right at home with this one.

Getting hold of Purple Cream seeds is somewhat of a rarity due to the lack of information on this strain in the public domain.