Where Can I Smoke Weed Outside or in Public?

This month the Laughing Tree answers where can you smoke weed outside without fear of being prosecuted?

You can call it pot, marijuana, cannabis, Mary Jane or ganja. No matter what, get your fast, quick and simple answers with “Ask Laughing Tree” advice column.

What gives Laughing Tree the qualifications to answer any question you can ask? With a degree in Psychology, over four years as a patient, time working in the industry, and a family at home, there’s nothing out there Laughing Tree hasn’t tackled. So, give it a try… Ask Laughing Tree ANYTHING!

Beth asks: I’m for legalization of it. But the funny part is since so many are making it against the law to smoke in public places, how does it work with smoking weed outside?

Thank you for asking such a great question about public smoking. It’s true that in the past 20 years the United States has passed multiple laws about smoking tobacco in public for health reasons. But, what does that mean for marijuana? Not only are people concerned about potential health hazards that have not been studied long enough to know if they exist or not, but cannabis itself is still classified as a schedule one drug on the national level, making it federally illegal.

As more states are moving forward with recreational marijuana, some have to ask themselves what to do about the potential tourist upswing. The possible income a state could bring in due to people traveling in to partake in a legal toke could be astounding.

Many will be looking to Amsterdam as a working example from which to draw ideas. Now, Amsterdam doesn’t just have people walking around smoking weed outside wherever they want. They have certain locations to toke called “Coffee Shops”, and they also have rules they must follow.

Amsterdam only maintains a small sector of the city for coffee shops with its own regulations like distance from schools. New regulations have decreased the number of coffee shops in recent years. In 2012, there were 221 located primarily in the city center; now in 2016, that number has decreased to 155.

With that being said, research in the city found that nearly 35% of tourists who visit Amsterdam stop by a coffee shop at some point during their vacation. This indicates that developing public spaces for people to enjoy cannabis can be profitable.

But, which states are trying to make that possible?

It looks like Washington still wants no one to smoke weed outside and pot to be smoked indoors. This can be difficult for people who are visiting the state. If you were staying in a hotel or a bed and breakfast, it would be polite to ask if any kind of smoking is permitted first.

Here is a list that Washington has made clear that people are not allowed to consume cannabis:

Oregon wants their smokers to be more discreet as well so again no smoking weed outside. They are asking the same of marijuana smokers as they do of tobacco smokers. They are asking people not to light up in public spaces which is a place where the general public has access: 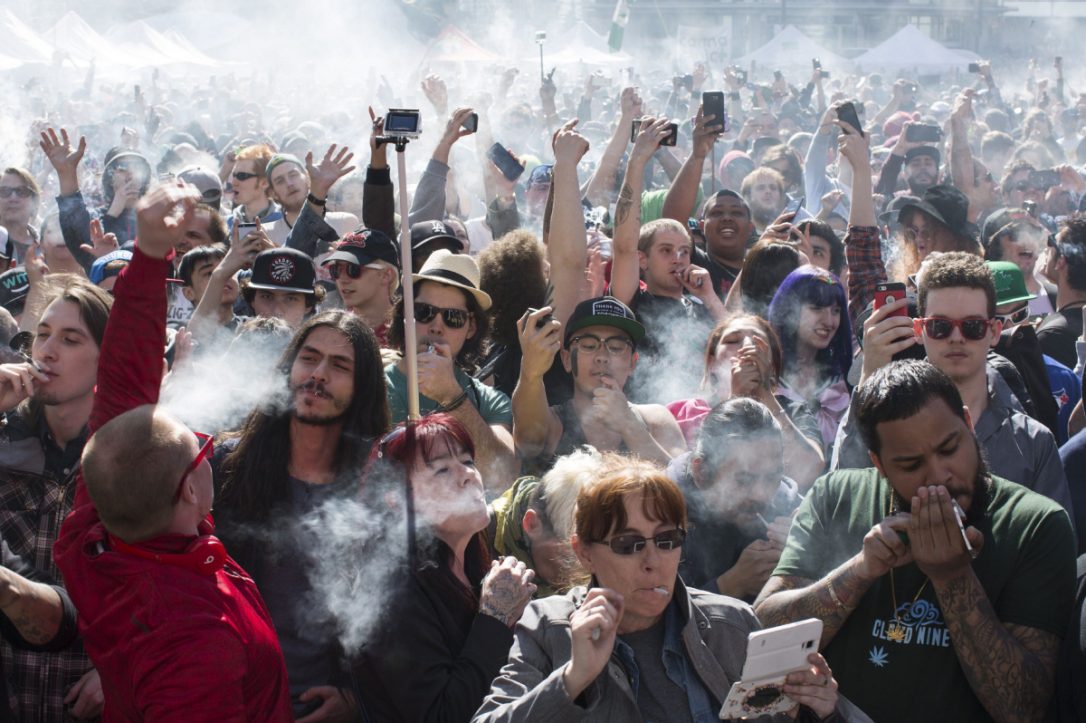 They are more lenient on smoking weed outside in California

California is more on the lenient side; they want marijuana smokers to just be discreet in their consumption. They have stated that pot smokers should follow no smoking zones.

Colorado is doing the best it can to follow the Amsterdam model. They are looking to be more forward-thinking than the rest of the states; probably to get more revenue from tourism.

They are beginning to develop “Consumption Areas” for businesses to be able to have marijuana consumed onsite. These can basically be any kind of business: bars, cafes, restaurants and yoga studios. They can have indoor or outdoor consumption areas, but have to follow a few guidelines first.

Nevada would prefer to keep toking on private property. There are talks about having marijuana resorts on Las Vegas Boulevard, but that is in the distant future. Many of the hotels also do not wish people to be smoking on their premises due to cannabis still being illegal on the federal level.

It is illegal to smoke:

Alaska just asks for individuals to smoke either on private property or out of view of the general public, which is tricky because they do say that is not okay to smoke in public. They have the same definition of public places as Oregon, so getting caught when you think you’re alone could still be costly.

Maine is trying to follow suite of Colorado and build an Amsterdam model. It is currently only appropriate to consume on private property, but as soon as recreational comes into effect, marijuana smoking will follow the laws of tobacco smoke. They will also have marijuana-friendly lodging for tourists.

Massachusetts is still working out their kinks to recreational, and right now it is still illegal to sell pot. But, people can consume on private property. Tourists could have a terrible time if caught in public.

Recreational marijuana use is still in its infancy here in the United States, and a number of states that have just passed recreational legalization may still take over a year before people really understand what the laws will be. But, there are a couple of states out there that are more lenient than others.

When it comes to consuming cannabis in public where recreational is legal, please be discreet. It may even be advantageous to use less noticeable options like edibles or vaporizers instead of trying to light up a blunt with some buds in an alley.

Where else would you like to smoke weed outside? Let us know in the comments below.