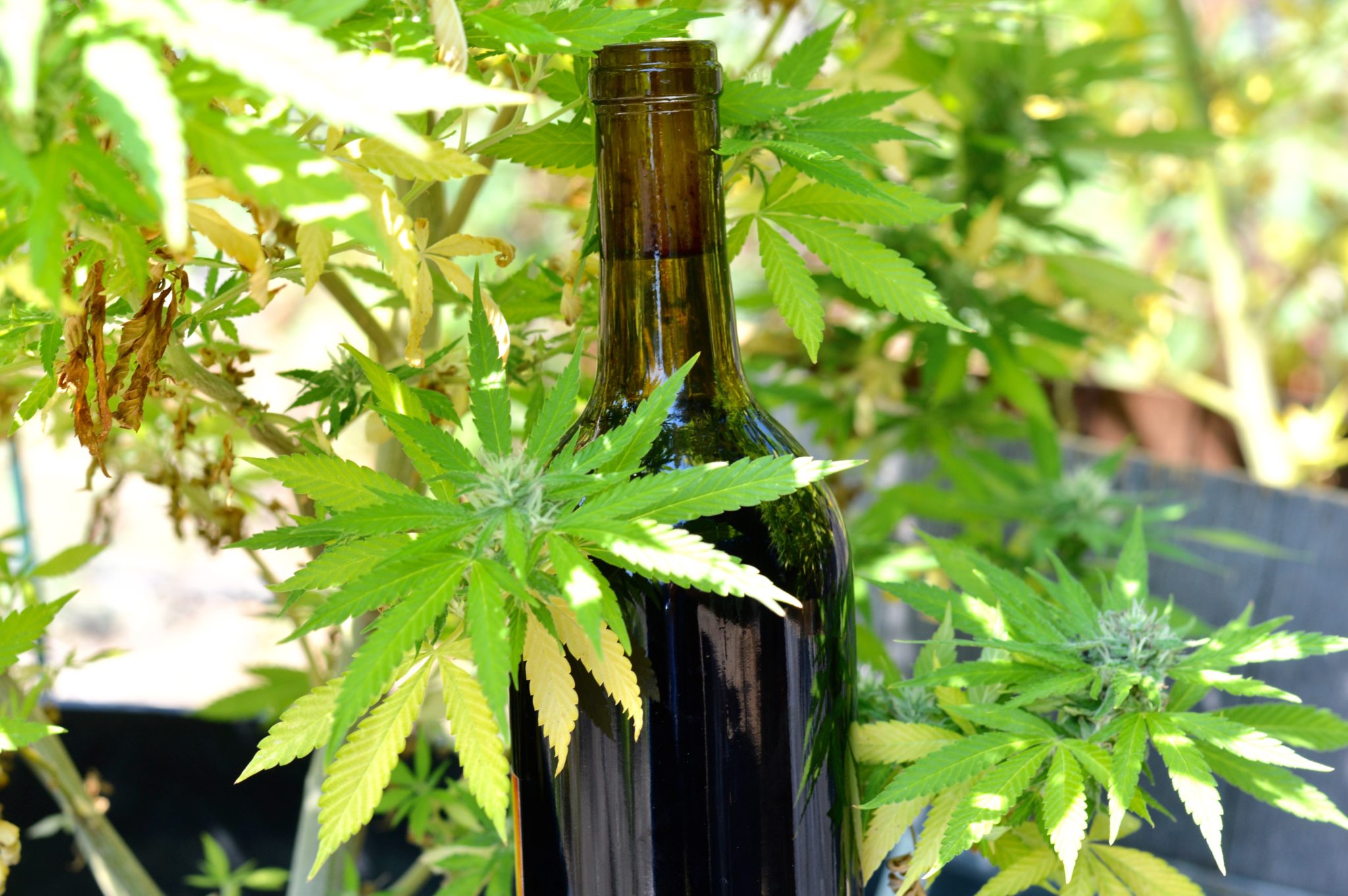 The California winemaker is careful in his or her craft. They are meticulous from start to finish not to contaminate the fruit or interrupt the fermentation. Many of them have learned to sit back and let the fruit do all the work – really emphasizing the natural process. But since Prop 64 has passed without any regulations on alcohol interaction, the hubbub around the area is whether two of the most profitable industries will join forces. Weed and wine are two of northern California’s most known attributes. When combined you get crossfaded, but wait, there is a crafty technique and maybe some benefits to the collaboration.

For a while, when cannabis was illegal, winemakers had been producing their own personal batches of weed wine – not for sale, obviously. If you are a cannabis advocate in the wine industry of Sonoma County, California, you probably have had the opportunity to get your hands on this rare elixir.  It’s around, you just have to ask, and winemakers are getting ready to put it out on the market once 2018 comes around.

Nestled in the Santa Cruz Mountains lives a little dispensary called Greenway, the first backed by both city and state. Greenway, founded by Lisa Molyneux, collaborates with Melissa Etheridge to make weed wine tinctures called “Know Label.” Because Etheridge doesn’t like the taste of grain alcohol as a solvent for her tinctures she turned to wine for the extraction of her medicinal preference.

You can find another product out on the market in Spain called CannaWine. This wine doesn’t set out to get you high because every wine is fermented with non-psychoactive CBD for a medicinal effect and herbal taste.

What Is Weed Wine?

Usually, cannabis is fermented with whites or rosés, but I’ve also seen it done with Pinot Noir – something light and aromatic. I recently met with one Sonoma County winemaker, let’s call him Tanner, who dabbles in a ganja vintage every year. We tried his Rosé of Grenache, fermented with Sonoma County’s finest grapes and cannabis. The taste: excellent. The cannabis gave the wine an herbaceous flavor that wasn’t overbearing and a nice grippy structure.

The effect: I was slightly more intoxicated and dazed. After two glasses, I noticed the intoxication level was higher than what I would feel from drinking two regular glasses of wine. The head high was that of which I would have after smoking a whole spliff to myself. Like mixing tobacco with cannabis, the mixture of alcohol provides an energizing lift and a serious high buzz. This energizing feeling might give people the feeling that they can still drive or go to work which is frightening, and I highly advise refraining from any such activities. Be forewarned: this stuff is potent. 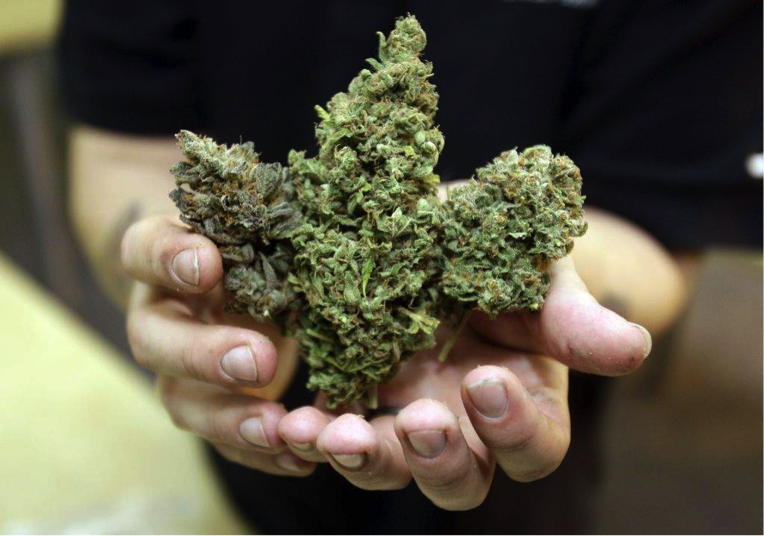 In California, weed wine has been a commodity since the 80’s, though it was a bit of a covert operation during the War on Drugs. But since legalization, more winemakers have been shelling out their own personal batches. The winemaker we call Tanner says that the purpose of weed wine is to enjoy the effects of cannabis with your favorite drink. “You could have an edible, but it will most likely be sweet and mess with your palate when tasting the wine,” says Tanner. “When you combine the two, you can have a nice calming high and enjoy the herbaceous aromatics that it gives to the wine.” So, it sounds like this mixture is mainly for wine connoisseurs, though with the two industries courting one another, more and more novices will be exposed.

After trying Tanner’s cannabis Rosé, I’d suggest sticking to one or two glasses. Anything more would be going a bit overboard. Another great reason for weed wine is the shelf life. Great wine can last for many decades and weed wine can hold up for just as long, whereas edibles, flowers, and tinctures have a much shorter shelf life.

What Does This Mean For The Alcohol Industries?

Alcohol and cannabis are destined for union. Sam Edwards, the founder of Sonoma Cannabis Company commented that “there will be much more collaboration than most anticipate.” We are already hearing of companies brewing beer with cannabis, and the wine industry already has a long-standing history with it.

At the Wine & Weed Symposium in Sonoma County on August 3, 2017, Hezekiah Allen, the Executive Director of the California Growers Association, commented on how “there couldn’t be more parallels between the two

[crops].” Allen has also spoken candidly that growers are looking more towards alcohol companies for sales rather than dispensaries, which comes from some long-standing bad blood from being underpaid for their product. Claudio Miranda, the Executive Director of Guild Enterprises, also spoke at the Symposium and preached why wine and weed are so synonymous:

“Wine and cannabis have a lot of similarities when it comes to the culture of enthusiasts and connoisseurship. Both can be studied and appreciated on numerous parallel levels — provenance, varietals, terroir, farming & production practices, producers, sensory analysis, etc. … This is a key intersection point where the industry can leverage its established wine appreciation framework to educate their customers on how to develop a more profound understanding and appreciation of cannabis — one that transcends the common stereotypes of weed being used solely to get high. Wine professionals have a unique opportunity in this regard given that they already possess the educational tools and marketing approach to unlocking the rich dimensions that cannabis connoisseurship has to offer. “

So, How do You Make Weed Wine?

You may be excited to hear that you can make your own weed wine! Well, if you have the right winemaking equipment and have some knowledge in making it. There is also a way to decarb your weed with already made wine. The two recipes are below:

Winemaking is actually quite simple though the pros have a more regiment and technical technique. You can tinker with your recipe if you really enjoy the hobby or try it once and show off to your friends.

Here Are The Basics:

If that’s a little too much of a time investment, try making Glüwein with your cannabis. Glüwein is warm, spiced wine that is very popular in Europe during the wintertime.

This one is much easier and will only take you thirty minutes.

Here’s What You Do: