Coca Leaves, Much Maligned but What’s the Truth? 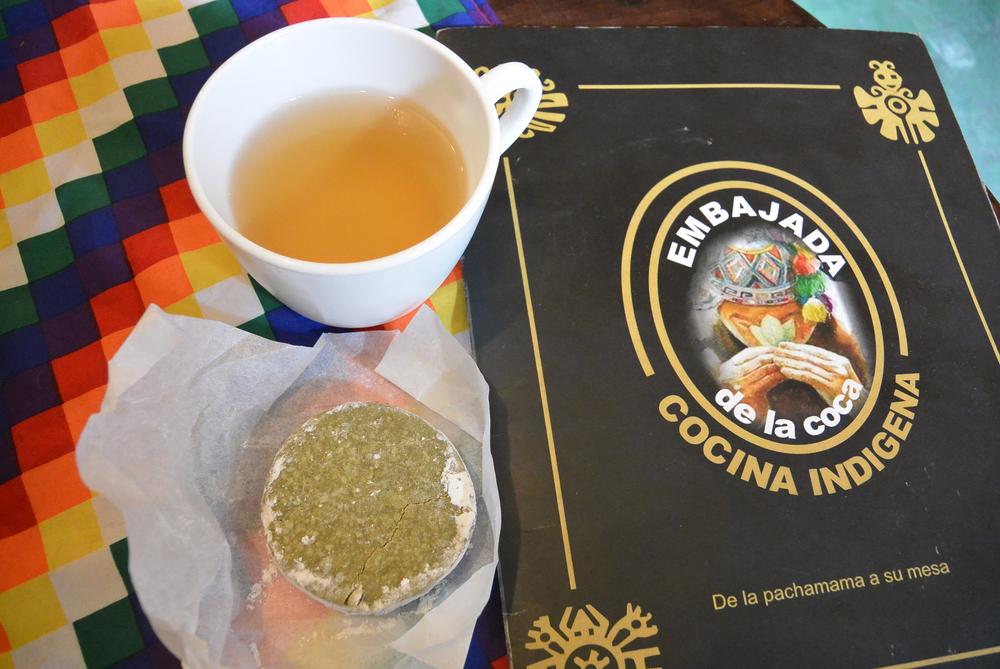 Coca is a sadly maligned drug, and it being illegal is as heinous as marijuana still being illegal in many jurisdictions. Coca for thousands of years was chewed by the inhabitants of the Andean mountains. Chewing coca leaves, with lime or baking soda releases small amounts of cocaine and other alkaloids. This gives the chewer energy, relief from pain, and hunger reduction. It’s very different from industrial strength cocaine base or powdered cocaine. Coca leaves and various products from them are legal in Bolivia, Ecuador, Peru, Colombia, Venezuela, Argentina, and Chile.

My experience with coca leaves was in Bogota, Colombia. I went there on vacation, and ended up going to la Calendaria. At a restaurant, I asked if they had yerba mate (a strong drink made from the leaves of the yerba mate shrub). The bartender thought I was asking for mate de coca, and that was my first time learning one could drink a tea from the coca leaves. So I tried it. It tastes similar to green tea. It doesn’t burn your stomach life cafe. It does give energy along with a calming affect. If one drinks a lot of it, things appear more visual. The effect is slightly similar to marijuana, except one’s thoughts are a lot clearer. It’s a much smoother drink than coffee or most teas and one doesn’t even have to add sugar or any other sweetener as the natural flavor is so pleasant. One cannot be harmed by this drink, and it’s a much more pleasant way to stay awake than by using coffee or even yerba mate.

A favorite past time in Andean cultures is chewing coca leaves. Chewing releases the alkaloids in the coca leaf. One puts some sort of alkaline substance such as lime, ashes, or baking soda in one’s mouth. As the leaves are chewed, one gets a numbing effect in the mouth. Generally one set of leaves is chewed for 30 minutes or so and it leads to a pleasant buzz. Repeatedly doing this gives energy and heightened alertness. It’s not harmful, and nothing like repeatedly putting down cocaine base. Powdered cocaine products are super refined with industrial chemicals and extremely concentrated, and at times cut with extremely toxic substances. But that is essentially due to the nature of the war on drugs, as making cocaine and other drugs illegal simply pushed the production underground. Anything underground cannot be regulated and one cannot hold the producer accountable for the product that is illegally made and sold. It’s why nations around the world are increasingly realizing prohibition doesn’t work for any drug, just as the United States learned prohibition didn’t work for alcohol.

There are other products made from coca as well. While in Bogota, a bartender placed some coca leaves in some warm vodka and let them sit for awhile. Alcohol is an excellent solvent, and is used to make tinctures from other herbs such as cannabis extracts/tinctures. After the alcohol had dissolved the alkaloids from the coca leaves, the bartender diluted it with water. It still made a shot with quite the punch, as I felt it do down in a way that I had never felt a shot go down. Of course it helps that we both smoked a little cannabis before hand. Having up to 22 grams of marijuana is legal in Colombia.

I would definitely recommend a trip to Colombia or the Andean region of South America. Not just to learn more about how positive coca is, but to learn more about the rich cultural history and the friendly people. The war on drugs has dehumanized entire regions of the world, and it has been a war against Latin America in terms of the casualties on the ground cause by prohibition’s attempt to arrest and incarcerate producers. This violence has destroyed families and communities, and though there are those that want to blame the drugs, it’s the prohibition that the United States forced upon the rest of the world post WW2. The people who grow coca leaves are doing to to make a living, the same way people who grow corn and grapes do so to make a living (corn and grapes both can be made into alcohol, which is a drug). Coca’s historical use has been as a stimulant. Many Westerners (and people around the world) drink coffee, which contains caffeine and that is a drug as well. In short, I definitely recommend trying coca leaves, particularly when one visits the Andean nations.